The land opened out again as we neared the coast and a sprawling, dilapidated city came into view.  This was Buenaventura.  After the Amazon rainforest and the loneliness of Darien, this was the wildest part of Colombia.  Graeme was justifiably paranoid when we halted at the quayside among a throng of people.  We both wanted to get out of the coach and put our hands firmly on our bags before they disappeared down the road.  I looked around at the harbour, more grey shacks tumbled into the harbour.  Some on stilts hung over an equally grey area of water and grey pelicans lazily flew across the lagoons collecting grey fish in their grey mouths.  I’ve never seen Pelicans quite so dirty.

I was then aware that a small grey boat was chugging into the harbour.  It was a small coaster with a long flat front for cargo, a group of cabins upon which perched the bridge and a small deck aft.  I laughingly said to Graeme “That’s our boat”.  I really must stop making comments like that.  It was our boat.

In a haze of activity, we were offloaded from our coach, and we stood helpless as we watched a flurry of nonsensical activity go on in the boat before we were finally allowed to board.  I say nonsensical because at the end of the furore, the only thing that seemed to have been achieved was some slops had been washed overboard. 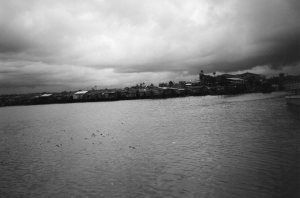 The weather really was grim now, it was oppressively humid, even the grey pelicans had gone off to see whether they could find some relief elsewhere, the hot drizzle annoyed everyone and the air became dark with the thunder clouds, and a rapidly onsetting dusk.

We gingerly stepped aboard and had a brief but comprehensive tour of the boat.  There were a number of bunks around the back of the boat.  Graeme and I were in the aft cabin, and I flung my bag on the bed.  Graeme shoved his into a corner on the floor and we went out to watch the movements on deck.  I got a whiff of the on board toilet and decided that whatever happened, I could wait the ten hours or so that it would take to get to Gorgona.

The sun was setting magnificently somewhere, but not here.  All I was aware of was approaching darkness as we let loose our mooring and drifted out into the murky lagoon.  The engines were on a low setting and we gurgled a few hundred yards to a floating platform with a petrol pump on it.  There we immediately stopped and spent the next half-hour refuelling.  I wondered whether Buenaventura was indeed purgatory and I was destined never to see another location ever again.

Finally we drew away from the petrol pump, now blazing in lights in harmony with half a dozen other ships around the harbour.  The dimmer lights of the city were in the distance, but so few houses seemed to have electricity that it made little impact compared to the marine equivalents.

We moved easily through the lagoon, but now the wind was rising and to the east we saw the flickerings of a major storm.  The hills behind the city were repeatedly silhouetted against the lightning flashes and the rain swept across the harbour out of the dark to chase us on our way.  The boat lurched against a squall that hit us end on, and we hove left and right for a moment or so. Then another squall, then the rain hit us and the lightning flashes and thunder joined the ensemble.  The almost empty little wooden boat tossed and turned in quite small waves and I suddenly began to wonder what would happen when we hit the open sea, a few miles to my west.  We were distracted by a number of people being sick over the gunnels and I felt proud that I had gained at least a modicum of sea worthiness in the few moments aboard.  Graeme was beginning to suffer and, although he always looked pale from his recent illness, he was looking almost white now.  Again, we were distracted from our thoughts by the guide coming round with his rucksack.  He dug deep inside and brought out a cold sandwich wrapped in silver foil.  I opened it up and remembered that I hadn’t really had much to eat since a very early and small lunch in Mauro’s mum’s house.  I was quite hungry but this was tempered by the rolling action of my stomach, a few seconds behind the rolling of the boat.

I ate it gingerly, and felt better with some ballast in the alimentaries.  It was useful as we hit the open ocean a few moments later and the little boat was driven high into the air and down again into huge water troughs.  Or so they felt at the time.  The thunder and lightning were all around and I was aware of incessant noise.  I tried to get some rest in the cabin below (it was now around 11 o’clock) but the aft cabin was right beside the engine and the drub-drub-drub was intolerable.

Water was washing all over the decks, both from above and from the sea.  The rails were drenched as the drips gathered and refell through the boats fretwork.  I tried to read.  Graeme came in and hauled himself up onto the top bunk.  A few moments later he was down again and rushing for the side.  I gulped and gulped, trying to keep what little dinner I had eaten inside me.  The heat was oppressive in the cabin, the air outside so dank and turbulent to caused me more misery.  Everything was wet, and the noise of waves, and engine and rain and thunder just would not let up.  I thought of the money I had expended to have this once in a lifetime experience.

Somehow, I must have got to sleep eventually but I remember awaking several times in the night and it seemed like we were still in the same place.  I realised the rain had stopped, but the wind was still quite fierce, and the waves on the open ocean still battered the boat quite mercilessly.  I say open ocean, but I suppose we were never more than twenty miles from any coast.  Although I could not tell, on leaving the islands to the west of Buenaventura, we had turned almost due south and gone parallel to the coast, then turned out to the south west to cross the narrow channel to the two islands; Isla Gorgona and Gorgonilla.

Finally, when I awoke again, I noticed the sky was a mizzly grey and that the noise of the engines were a slightly different tune.  I came up on deck and a beautiful tropical morning was emerging, with a thin veil of mist and cloud covering the ocean, and I could see a few identical coasters to the east and to the west, a small volcanic island rising above the waves.  This was Gorgona, to be our home for the next four days.  I wasn’t sure what was going to happen next so I went back in to raise Graeme.  He was not a happy man.  He had been sick a few times in the evening and was thinking he was regretting the whole idea of the trip.  He came off his bunk and reached for his rucksack on the floor, to realise that the wash had soaked the bottom half.  I had left mine on the bunk, absent mindedly, but in the end fortuitously, as it had escaped the worst of the wetting.

The engines cut out and we saw a small flotilla of boats emerge from the island to take us in.  Several people started the ship to ship transfer, and at that moment, as I watched the two boats bobbing independently, among a calm sea, no engines and no storm, my stomach gave in to its instincts and I threw up over the side.