My hostess arrived soon after – she was an old employee of INR, and greeted Dennis warmly before introducing herself to me.  I went home with her, to a small house in Hilton.  I chatted amiably with her as we drove, not regarding the route home in any detail.  The evening went quickly, talking about many things, my mugging, INR, the Antarctic (her partner was doing a PhD there).  We got to talking about my plans for the next few days and the camping trip with Kirsty up in the Royal Natal.  I remembered Kirsty’s story of her meticulous friend.  I started to retell it, putting in the details of the labelling of containers, and the packing procedure for the car.  About two thirds of the way through the story, the slightly shocked expression across the room told me something…that I was telling this to the subject of the tale.  I stopped embarrassed and there was a short pause before the girl said, very dryly “Well,  I think she sounds quite sensible really”.

Next morning, I had a further meeting in INR and then I picked up a rather nice Toyota from the rental in town.  I drove up to Hilton and found a small shopping centre built on an old quarry to get some lunch.  Sitting there sucking on an ice cream float, an awful thought crossed my mind that I couldn’t remember where my lodgings were.  Up till then I had been chauffeured around and had not paid attention to where I was going.  After lunch I tried to quarter the town, but Hilton was one of those neat little suburbs you find all over Africa, the houses are hidden behind high fences or thick hedges, and one little manicured avenue looks very much like the next.  I struggled for about an hour to find it, going down several avenues more than once.  One driveway that looked promising was a no go.  I was hoping that the local police did not get suspicious of my slow driving.  More by luck than judgement I got home.  I memorised the route immediately.  I then went out again and headed for a view point north of the city.

Pietermaritzburg has a very pleasant prospect.  The vast pine clad hills behind overlook a bow tie shaped city with the knot as the city centre.  More than any map or drive around the city, and despite the thin veneer of civilisation and reborn enthusiasm, the structures of eighty years of apartheid policy shone through in the geography below me.  On the hillslopes, as on the hills of many a city, the rich white suburbs, in the centre a city both old and modern had its commercial heart, and to either side in the deeper valleys lay the old black townships, still populated by the black masses, separated from the other housing not by political apartheid but by economic apartheid.  But Natal had one more aspect which did not occur in other parts of the country to the same extent and the geography again demonstrated it – to the south east of the city, housing slightly superior to that of the black townships denoted the Asian suburbs. Almost a third of the population in Natal were of Asian origin. 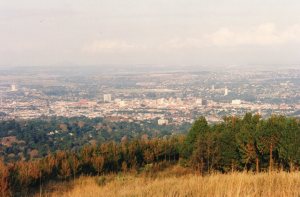 A small white family parked at the viewpoint and we chatted for a short time before I saw the sunlight reddening in its reflection on the nearby hills and I realised it was time to go home.  I found it easily this time.

Next morning I had promised myself a drive around the Natal Midlands.  They were being marketed as a tourist destination, concentrating on a range of crafts and eating houses, but to me its major features were the natural landscape.  Not the dramatic scenery of the Drakensburg but a familiar one to me, reminiscent of the Welsh or Scottish Marches.  Rolling farmland full of cows and corn, reaching into pine forests, white gated estates with poplar tree avenues.  Further north the scenery gradually changes to wilder moorland and rocky outcrops, and occasionally everywhere a rondavel appears to remind you that you are still in Africa.

The land extends about forty miles from the outskirts of Hilton to Nottingham Road, an old crossroads and railway yard off the main Durban to Jo’burg road.  My first stop was the Howick Falls, a dramatic drop of river just above Hilton. 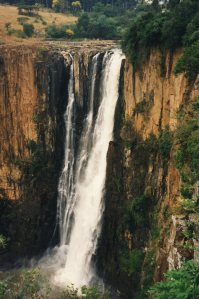 The style of tourism here reflects the American style, and one side of the falls was completely changed into a concrete promenade.  A group of white hippies (they seem to be attracted to this area) were selling useless trinkets in the car park, and I descended to the foot of the falls down a slippery path, trying not to be freaked out by the warning that muggings have occurred down the path.

My next stop was the Umgeni Safari Park, an enclosed area which has been stocked by none threatening game.  It allowed me to walk safely for the first time in amongst the game.  No big cats, rhinos or elephants, but I managed to stroll within a few feet of antelope (wildebeest, kudu and impala mainly) and giraffe.  What was more interesting was the smaller game and the insects that roamed around, and also, for the first time, I smelt the musk where the animals marked their territory or sent their messages around.  In some places it was near overpowering.  There were the marks of many other animals, ground burrowing mammals, birds nests and every shape size and smell of dung you could imagine and I felt closer to the bush than I could ever be in a vehicle. 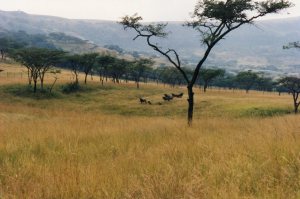 2 thoughts on “South Africa – Hilton, Howick and the Natal Midlands”