Back into the big blocks of rolling mountains with its mixture of dark forest and browning grass, I drove for another half hour until at last I saw the neat wooden houses that formed my hotel for the next couple of nights; Pilgrim’s Rest.  Set high in the Drakensburg Hills, Pilgrim’s Rest was a prospecting town in the mould of the Ol’ West of America, but here in the east of the Transvaal.  I registered and settled my meagre travelling companions into the room; a small bag, my camera and the straw hat.  And what a room.  Either Jesse James was going to walk in any moment or I was in some boudoir of the local knocking shop.  A brass bedstead greeted me at one end, an old style gaslamp perched on a lightweight dresser, with ornate carvings around its mirror.  There were tasteful pictures of English country scenes hung on the walls, all very different from either the huge landscape I had driven through or my traditional ideas of what an African hotel contained. 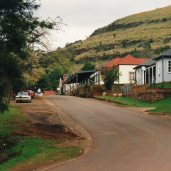 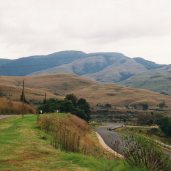 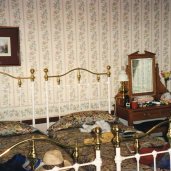 I went for a walk into the village, what there was of it.  High up on the Drakensberg, a front moving from the west and grey clouds hanging over me, it was fairly chilly, and again the comparison with summer holidays in Scotland crossed my mind, where you had to take every piece of clothing you have with you to cover all the weather types you were to find.  The village had been bypassed and the old road now formed a pedestrian-friendly route past a line of ornate turn of the century houses.  A couple were part of a working museum, others were twee shops selling sweets, souvenirs and occasionally a hide shield or wooden spear.  Here was an old post office, too, and each building was dressed up in their original colours, smells and habits, but very sanitised for tourist consumption.  The only building of substance behind this main line of villages was a small red sandstone church, a simple white cross at one end denoting its purpose.  In the little graveyard around, the names of many Celts who rushed in for gold at the turn of the century adorned the otherwise plain gravestones. The main buildings petered out at a bridge over a river deep in a ravine and beyond I could see a set of smoke trails rising from the small houses of the mainly black workers at the village.  Spoilt by my recent encounter in Jo’burg I found that I didn’t want to stray too far, and it was soon to be dark, so I wandered back past all the shops and museums.  On my way back to the hotel, a medium sized African guy said hello. Slightly wary I said hello to him and he got to chatting.  He worked at the hotel in the dining room and was just heading back home after his shift.  He told me about the sights to see around the village.  He was a Zulu working up here in the tourist industry.  I think he was slightly taken aback by my wariness, but my fear of being approached by any strangers could not easily be hidden.

I was exhausted after 500 miles of driving, with only a few viewpoint style stops and a brief lunch before reaching the Drakensburg itself.  I ate in the restaurant and then retired.  The following day I intended to see the sights around the north of here; some spectacular I had been assured and then move down into the Low veldt and the attractions of Kruger.

I was up bright and early and headed back east towards Graskop.  I intended to circle the main sights to the north and head back through Sabie over a dramatic pass.  But the front that had been forecast the previous night was fast approaching, and the day was even greyer than the previous.  I rose out of the north east side of Graskop, a few miles on reaching the first of several dramatic waterfalls toppling into gorges that are cutting back into the escarpment. 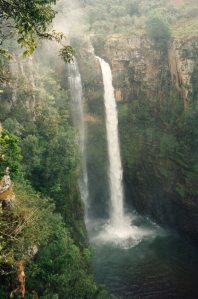 The Mac Mac falls was easily the best, two parallel jets of water, one white and frothy, the second grey and less thundering fell a good two hundred feet into a plunge pool that seemed to disappear into the gloom.  Against the side of the sheer sandstone cliffs hung thousand of vivid green plants, mosses, ferns even trees, permanently drenched in the spray which flew back up.  Up here close to the edge of the escarpment, I could not distinguish between the spray and the clouds which were now swirling around a few feet above my head.

It was with a feeling that I was going to be sadly disappointed when I reached my next stop.  You know by now that I love expansive views, especially busy ones.  I had been told  of a treat in store at Gods Window, just a mile or two further on.  Here you can look back south along the Drakensburg towards the main road to Mozambique, down the forest clad slopes into the Low Veldt and the vast plain in which sat Kruger.  When I reached the car park and started up the trail, I could hardly see my feet in front of me.  The cloud whirled around the plants and curious limestone features, sometimes obscuring the path completely.  And  when I reached the view, the murk was so bad that I could only barely make out the next two hills scarps.  However, the haziness, the little bundles of fluffy cloud in the river valleys a couple of thousand feet below me and the stillness of the countryside under this blanket made God’s Window a mystical place for me.  I was alone on an edge, an edge which marked the boundary between the plains and mountains of South Africa and the bushland which stretched as far as Ethiopia in the north.  And under this shroud, I just had to believe my map that it was all “out there”.  On the way back I became more aware of the natural rock garden I was stepping through  There were a few ferns and grasses, saturated in the mist, but they were mixed with hundreds of red hot pokers, all in full bloom, wonderful beacons in amongst the grey. 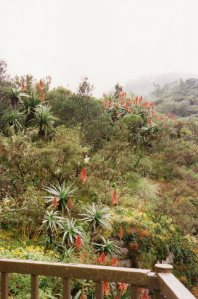 God’s Window in the mist

They were offset by small lumps of white lichen-encrusted limestone.  As I got back to the car park, having seen no-one, a large white tour bus drew up and a bunch of French tourists piled out, jabbering away and started for the view.  The driver was a tall man, a red handlebar moustache and blue denim jacket and jeans gave me the impression he should have been around when the gold diggers were in Pilgrim’s Rest and be herding young healthy steers instead of old fat Parisians. He acknowledged me as he lit a cigarette and leant against the side of his coach.

3 thoughts on “South Africa – Footsteps along the misty edge”