But it was still not true safari – it was a hike.  So one night we clocked off early and with a couple of Robin’s friends who had just survived two long haul flights from the States via London, we set off for the park.  It was already close to dusk when we arrived but it helped in that many of the animals were roaming around in the cooler air.  We saw Masai giraffe, we saw ostrich and zebra, antelope and warthog.  I saw my first lions in Nairobi, two young males still without their manes and with spotty legs like a leopard.  All the while aircraft from the nearby airport were taking off and the edge of the park was marked by low and high rise flats.  Down in the bottom of the park we came across a mother and her baby rhino; again a first for me.  The mother took offence at our stopping and mock charged us a couple of times.  I was so enthralled by the whole scene; all these animals who had been exhibits in zoos or characters on the TV screens were now playing out their parts live.  I did not realise that I was boring my hosts silly.  The two American visitors had fallen asleep in the back of the van – their bodies still here but their spirits having been dumped over the Sahara desert some hours beforehand.  Robin and Russ were fed up of looking at these mammals as a tourist is tired by European churches.  Then they started spotting the birds, a stinky looking Maribou stork, gold crowned cranes, a couple of ground hornbills.  These were quite interesting to me, large ground loving birds with vivid colours.  But Robin and Russ were also much more interested by the tiny birds dashing in and out of the tall grass.  I didn’t get it that time. Now in South Africa where I was tired of the number of Impala I had stopped at, I could start appreciating how you looked at the detail. 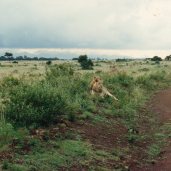 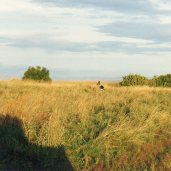 Back in Kruger, after an hour or so I reached Letaba, one of the major camps on the main south-north road.  With the heat now too oppressive for me to continue, I took refuge in the Elephant museum, basically two rooms, one a massive treasure trove of ivory, the other educational boards of how they deal with the huge populations in the park.  Because they are protected, the breeding has been very successful.  It has caused some problems, especially at the interface with tourists.  Rogue young male elephants, chucked out by the matriarch and beaten out of mating by older males, go round testing their strength on anything they come in contact with, and camper vans seem a good target.  The park are castrating some of these males to remove some of this dangerous libido, and several of the females have been sterilised through contraceptives to better control the populations without resorting to culling.  In  a well organised park like Kruger, the prize piece of the South African Parks Service, there is enough money and skilled staff to see it through,; I wondered whether it would make it to the countries further north where similar pressure problems have been found. 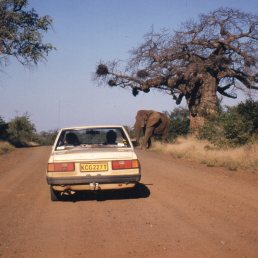 Rogue Elephant – decided to pull back

Instead of taking the main tarmac road south I went along by the Letaba river towards Olifant’s  camp.  As if to underlie the problem with rogue elephant, I came across one under a baobab tree.  Another vehicle was in front of me.  Now I am not a complete coward, but I know not to get too close to elephants of any sort and the young males, of which this was clearly and example, should not be trusted as far as you could throw them.  When he saw the activity in the road and stopped bashing the bark of the baobab tree, I knew it was time to retreat, so I put the Bucky  in reverse and rode back to the top of a brow about a hundred yards back.  Under my breath I advised that the other vehicle do the same, but the family inside were leaning out through the windows getting some great photos from about twenty yards.  The young male was even flapping those great ears of his for effect.  I knew better, and was not surprised that when these warning signals were not taking seriously that the elephant charged the car.  All of a sudden, with a spurt of dust and spinning wheels, the other car joined me on the ridge.  The elephant only charged twenty yards, saw he had won and went off into the bush.

Lord of the jungle 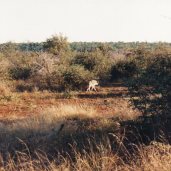 The activity picked up as the sun started to drop and I approached a look out point across the Olifant’s River.  On its banks, amongst a bunch of rounded boulders were two hippos, their pink underbellies the only things belying their camouflage.  As I headed closer to the park, I came across a rather distressed hyena, limping badly.  It could hardly be bothered by me, it stared rather forlornly at the car and staggered off into the bush.