The alternative view is to try to build up capital, import the goods you cannot get locally, buy into the global economy and sell it back what it wants, sunshine and sea.  Thus the hotels are getting larger, the restaurants and nightclubs noisier, a lime now involves a ghetto blaster barking out a hybrid of local music and stuff from the back streets of Detroit and New York.  Cable TV feeds American tastes and attitudes straight down to the Caribbean, and once seen, it is craved for.  It is almost, lets forget the vulnerabilities that exist here, we can enjoy and demand the life of the states and to hell with the rest.  The fragile islands, the insular communities can hardly cope with it, and the cracks are forming.  The have nots are being distanced from the haves, the drugs are seen as a fast way to get the cash to pay for all these trappings.  While the Yardie crime of Jamaica has been around for years, many smaller islands are now talking of heightened crime rates, burglaries, some of it with guns.  The alchohol and drug abuse on the islands themselves have been there for years, but the family safety nets that used to exist have shown strain on the smaller islands and have been demolished on the larger islands.  If the black market in drugs cannot get you the money, kidnapping for ransom has become fashionable in Trinidad, to the ludicrous extent that some of the people being kidnapped probably cannot afford a ransom that would cover the costs of the heist.

The young democracies of the eastern Caribbean in particular struggle to cope with these tensions.  There is massive corruption in several governments and private businesses, partial patronage is rife.  But in many ways, on small islands where the markets are small and there may only be one operator of a business, monopolies are inevitable.  Nepotism too is predictable, as most of the islands can be reduced to a few intermarried families.

These little rocks in the middle of the sea are being thrown one way and the other by internal and external pressures, despite best efforts they are still vulnerable economically, socially and environmentally, even the centre of the earth is spitting up at them and the air we breathe tries to knock them down.  Not exactly paradise.

And yet, the veneer of paradise is still there, and even most of the inhabitants of the isles realise they sit on jewels.  Verdant mountain ranges, fresh water, few diseases, the best beaches in the world and some spectacular riches in the sea, life can be good here.  Which is why despite the huge emigration to Europe and North America, many people retain a family home in their country of origin and often return for their retirement. As a poet, Michelle Gibbs, born in Chicago but living in Grenada, put it, the Caribbean islands and its people are looking for “balance in the midst of stormy seas”.  Perhaps the best and the worst of the world sits on these tiny islands.

That first week in St Lucia quickly showed me how the islands worked.  I had often wondered how it would be to live on a small island, to be brought up swimming in the sea amongst the reefs, to be able to pick fruit off the trees all year round.  I looked around at various places in Castries and thought, I could live here.  After I returned from St Vincent, Keith took me out on my last night to Gros Islet, to the north of Castries opposite Rodney Bay marina.  A cluster of chattel houses met at a cross roads.  Several years ago, this regular liming joint began to grow.  On a Friday night, the bar at the corner started to serve up barbecue, fish, spare ribs and, of course, chicken, with all the provisions to go with it.  Someone else started frying Johnny Cakes nearby and the locals were joined by people from the surrounding villages.  Tourists from the nearby resort hotels heard about this and stumbled in to see some local “colour”.  A guy set up a ghetto blaster in the street and people started dancing,  a few more food stalls set up, old women sold peanuts and fried sweetcorn.  Families from all over the island would come, hotel bussed tourists in by the hundred.  The little Friday night lime turned into a regular street party.  Keith was a regular at the little bar that started it all off and we went in, grabbed the usual R&C and JWB and watched life go by on the cross roads below.  We could hardly speak, the music was too loud, but we did not need to, it was good just to sit around and enjoy life.  Gros Islet has probably outgrown itself now and a competing lime in Anse le Raye is now more popular with St Lucians.  But even so, I liked the informality, the general mixing, the fact that families and foreigners could walk along an ill lit street, soaked in alcohol and high spirits and still feel safe.  I definitely thought, I could live with this. 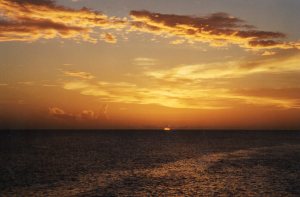