This keeps on happening out here.  In Tobago, a long thin island with rolling plantations taken over by mass tourism at one end, rugged mountains and lonely fishing villages at the other, I could see myself driving into the capital, Scarborough, saying hello to Norman Parkinson in his little café in the town centre.  I would imagine driving up and down that winding coast road.  In Trinidad, large and ugly though much of Port of Spain is, I wondered at living in the suburbs and joining the commute into town, with weekends hiking in the forests or exploring the north coast beaches.  Even in Jamaica, which has a lot of rough edges, there were places I felt at home.  More so than in Africa, I felt I could actually live in these places, join in with the community, rather than locked away in some compound or waited on by servants.

It became hard for me to remember my emotions on that first visit to St Lucia, or the sarcastic comments from my colleagues about me “going on another holiday” out to one of the islands.  One of the project managers in Chatham had to go through my receipts on my return, and she got particularly miffed when she saw I had dined at Basil’s Bar, best in Mustique.  Of course I had actually dined in the Kingstown version below the Cobblestone Inn, but she never believed me.  But with names like Martinique, Antigua, Barbados, Tobago, Jamaica, they evoke the typical tourist image; swaying palm trees, crystal clear turquoise waters, bright white sandy beaches and lot of rum.  What I found, as I had found elsewhere in the world, was that the true Caribbean is a mix of this (yes, there is a lot of those kind of places around) and a whole series of other images, high mountains, volcanos, sugar cane, bananas, fishing villages, spices, and of course, the wonderful people.  And yet there is still this overriding feeling of living on the edge, and the pockets of poverty are as bad as the worst in Africa or Asia. 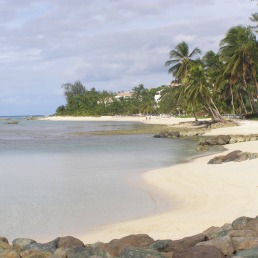 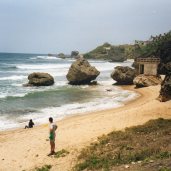 Rocks on the beach

From the north of Bathsheba

On the coast, the backs of the beaches are covered in morning glory, in a few places cleared away and grass laid to give a park like feeling – could almost be New Brighton.  Just don’t lie under the heaving coconut trees for too long in that wind.  I walked along the beach for a mile or so, picking my carefully across the sharp coral rocks.  Brain corals, staghorns and elkhorns everywhere, the fragile looking skeletons of sea fans thrown up onto the shore.  Flotsam and jetsam from around the world kicks up there, mostly recognisable as fishing tackle or floating devices, occasionally goods from ships or carried around from other bays – a propensity of trainers. 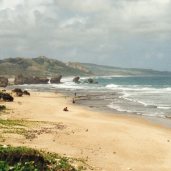 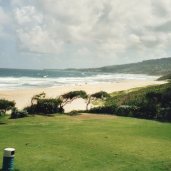 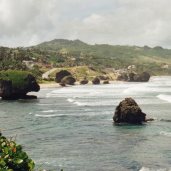 Bathsheba from the S 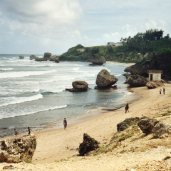 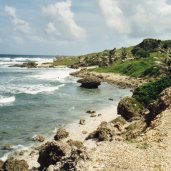 An old fishing boat, its paint peeling and fading in the sun and spray, bobs up and down in one of the few coves on this stretch of coastline.  How many years since people fished here?  The houses above are empty, probably an abandoned villa or hotel from a particularly bad hurricane.  Everything here is dictated by the weather, the few trees are bent heavily away from the coast, the other shrubs hug as closely to the ground as they can get.

And yet, just half a mile up the road from Bathsheba is one of the prettiest gardens I have ever been to.  The Andromeda gardens, like their namesake, cling to the rocks on that Atlantic coast, but they sit in one of the valleys that cut into the ridge and subsequently, large tropical trees have grown and other species, more delicate than one could imagine, take shelter beneath them.  I spent a very soothing afternoon sitting in that garden, smelling in the aromas of a million flowers and watching the birds and insects busy themselves.  As I lay there, glimpsing the Atlantic through a gap in the canopy, I said to myself.  I could live here. 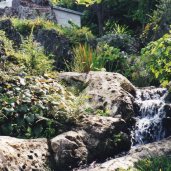 My favourite place is over that ridge and down onto the Atlantic coast.  My first time exploring the island one sleepy Sunday, I took a cheap minibus ride into town from the Blue Horizons resort in Rockley.  I did wander around Bridgetown for a short while, it has an pleasant setting astride the Careenage, a strip of water full of fishing and pleasure boats, a recent walkboard had enhanced the area, if only they had cleaned the water up.  The major buildings at the back of Trafalgar Square (renamed recently National Heroes Square) are old but not imposing; the parliament building looks more like a parish church than a seat of Government.  I prefer to amble round the old warehouses to the west of the centre, part West Indian, part British and part wild west frontier town, Bridgetown is a mixture of styles.  I worked my way back to the main bus station for the government buses.  Barbados has the best public transport system in the Caribbean.  The terminal is quiet most of the time with only a few expectant passengers hanging around out of the sunlight.  Just before the hour, a fleet of buses draw up against the gates and almost perfectly to the clock, they pull back and head off to every corner of the island.  I took the bus to Bathsheba.  It circulates around the perimeter of the city centre, across a wide parkland and into the suburbs.  On a Sunday, the bus fills with old ladies dressed up to the nines for church, men in suits or at least white shirts and ties, an occasional adventurous honeymooning couples and the odd surfer clutching his board.  Or several odd surfers clutching their boards.

The main road rises steadily, despite the terrain being a series of limestone terraces.  The road gets through these in narrow cuttings, emerging once more in the sunlight.  As the houses give way to sugar cane you can glance back down at the blue Caribbean beyond the city.  The hill ahead rises uniformly, the peaks demarcated by a series of radio and TV masts.  We stop at several places which could almost pass for villages.  The terrain becomes more rugged and the road has to follow the contours more closely.  Fewer sugar plantations exist up here, and a more diverse range of tree crops take over.  Finally we go over the edge, a small area of scrubby forest is all that remains of the old vegetation.  On the other side, the road hugs the side of a steep drop, and the mist rising from the Atlantic.  A few small fields of bananas manage to grow in here, but you tumble down a series of steep inclines to the coast.  Bathsheba, by far the largest settlement on the Atlantic Coast, is hardly a village, more a cluster of small houses, a couple of bars and a lot of limestone stacks.  It is absolutely gorgeous.  The Atlantic batters in  – nothing stopping its progress from the Sahara to this point.  There are a series of beaches, most of them full of coral rubble, which are divided up by huge blocks of limestone, which have either fallen into the sea or have been eroded away from the mainland by the salty winds and crashing waves.  At most times of year, a bunch of wetsuits is bobbing up and down just beyond the surf waiting for that wave.  Especially popular is the Soup Bowl, a point where the topography of the deep water makes the best breaking rollers.

“Unfortunately”  ( 🙂 ), Barbados is a busy node for people involved in the aid and development business, and I have usually passed through there on the way back from somewhere else or stopped just to attend a short meeting.  Only a couple of times have I got out and about beyond Bridgetown and the South Coast.  Barbados is so different from the other islands (many other West Indians call it boring) but I have been intrigued by its landscape and make up.  Contrary to some people’s opinions it is not flat.  It is true it has not dominating peaks like St Lucia, St Vincent or Dominica, but it has a couple or ridges that split the island up.  The north east area rises to 1000 ft before plunging quite dramatically into the sea; the locals call this area Scotland.  The drive up to this ridge from the west is a simple incline of about nine miles.  Another misconception is that the whole island is built on.  Again, it is true that the south and west of the island is like a medium sized conurbation of a quarter million souls.  Bridgetown is the capital, commercial centre and the hub for this sprawl, but the city centre is minute, and cannot cope with the crush of traffic that heads in, out or through every day.  Along the south coast are a series of seaside towns some of which may ring familiar.  Beyond the Garrison, the massive fort area including the racetrack at the Savannah, you get Hastings, then Worthing and Rockley before heading out to St Lawrence, Dover and Oistins, the old fishing village that has attracted a reputation as a Friday night liming joint on the same lines as Gros Islet in St Lucia.  Many of the larger resorts are down here, the kind of hotels that my paymasters could afford for me. 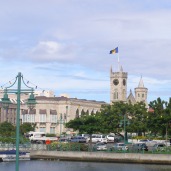 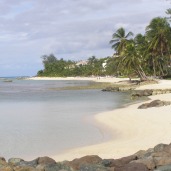 Up west, the sheltered Caribbean side, are the exclusive villas and resorts of the Platinum Coast.  Beyond Brighton are two further towns, Holetown and Speightstown but drive along the winding main road and you would be hard pressed to find the dividing line between them.  Inland from Bridgetown too, the houses seem to go on interminably, gradually gobbling up the sugar cane fields around the bypass, the ABC Highway.  But go a little further and the cane fields are more numerous than the housing estates, and by the time you reach the high ridge or the top of the Island at St Lucy, you can feel quite isolated.